For the best experience viewing this site you need the Flash Player installed. 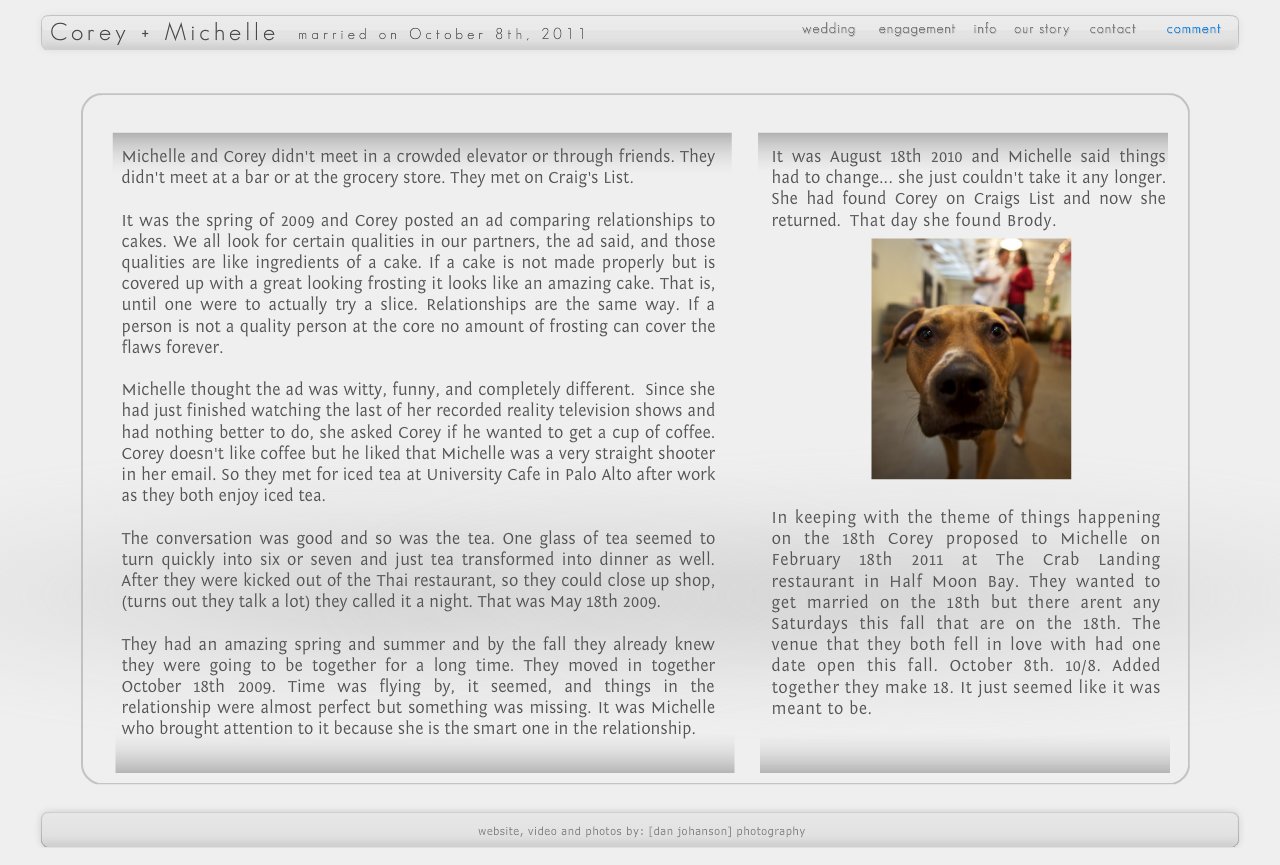 It was August 18th 2010 and Michelle said things had to change... she just couldn't take it any longer. She had found Corey on Craigs List and now she returned. That day she found Brody.

Michelle and Corey didn't meet in a crowded elevator or through friends. They didn't meet at a bar or at the grocery store. They met on Craig's List.

It was the spring of 2009 and Corey posted an ad comparing relationships to cakes. We all look for certain qualities in our partners, the ad said, and those qualities are like ingredients of a cake. If a cake is not made properly but is covered up with a great looking frosting it looks like an amazing cake. That is, until one were to actually try a slice. Relationships are the same way. If a person is not a quality person at the core no amount of frosting can cover the flaws forever.

Michelle thought the ad was witty, funny, and completely different. Since she had just finished watching the last of her recorded reality television shows and had nothing better to do, she asked Corey if he wanted to get a cup of coffee. Corey doesn't like coffee but he liked that Michelle was a very straight shooter in her email. So they met for iced tea at University Cafe in Palo Alto after work as they both enjoy iced tea.

The conversation was good and so was the tea. One glass of tea seemed to turn quickly into six or seven and just tea transformed into dinner as well. After they were kicked out of the Thai restaurant, so they could close up shop, (turns out they talk a lot) they called it a night. That was May 18th 2009.

They had an amazing spring and summer and by the fall they already knew they were going to be together for a long time. They moved in together October 18th 2009. Time was flying by, it seemed, and things in the relationship were almost perfect but something was missing. It was Michelle who brought attention to it because she is the smart one in the relationship.

In keeping with the theme of things happening on the 18th Corey proposed to Michelle on February 18th 2011 at The Crab Landing restaurant in Half Moon Bay. They wanted to get married on the 18th but there arent any Saturdays this fall that are on the 18th. The venue that they both fell in love with had one date open this fall. October 8th. 10/8. Added together they make 18. It just seemed like it was meant to be.